Agile Unified Process is a simplified version of RUP model. AUP describes a simple and comprehensive approach to the development of business applications using best practices of RUP model in combination with agile methods. It was presented by Scott W. Ambler for the first time in the year 2005.

Compared with the RUP model, AUP also has four main phases (start, elaboration, construction, transition). The basic application is in a simplified view of basic activities and so the three disciplines, business modeling, process applications, and analysis and design are  replaced with only one discipline – modeling. It is an important part of the AUP models, but does not dominate it because it is necessary that the project remains rapid and is developing models and documents that are just barely good enough. 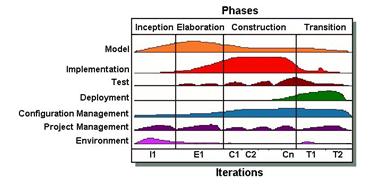 Time required to deliver the first version is longer than the others. This is because in this phase there is a need to make certain administrative tasks for the development to work and that people would become effective and cooperative. For example, if the development of the first version lasted 12 months, the development of other version could last 9 months, and all others 6 months. This can be very useful because the focus is fairly early directed on introduction of system to the user, and that experience helps in avoiding problems in subsequent deliveries.

Accelerated unified process (AUP) is based on several principles: